I just come back from an intense week of scanning in Pompeii, where together with Stefan Lindgren (LU), Carolina Larsson (LU), Matteo Dellepiane (CNR) and Marco Callieri (CNR) we finished the 3D acquisition of the insula V1.
Last year we focused on the houses of "Cecilio Giocondo" and "Torello di bronzo" (both part of the insula) and at the end of the campaign, we  found the time and the energies to acquired a large portion of the street that surround the insula. This year, even if the weather slowed down our work, we completed the acquisition of all the environments left from the previous campaign, closing in only two days the documentation of the insula (fig.1).
The knowledge gained last year allowed to  speed up consistently the acquisition campaign; in two days, with two teams, we collected and almost  aligned approximately 200 scans. Pompeii is really an incredible site, every small room has so many different typologies of information, even if the environments are almost empty the walls are characterized by a large  amount of details to document (fig.2).
During this season we mainly focused on the north-west and south-west part of the insula, acquiring environments such as: Casa deli epigrammi greci, the bakery,  Caupona, etc.
These areas are characterized by small and very tall rooms, all connected each others by narrow corridors and small entrances, moreover a number of containers for storage or ovens were still in their original position -bakery or the shops- and the use of the scanner for the acquisition of these rooms was not sufficient (fig.3).  In specific the containers for the storage were so close each other to do not allow any (safe) scan position. In this specific case we decide instead to acquire these elements using image based modeling techniques. This approach proved to be very successful and easy to integrate with the laser scanner data.

The use of just one instrument or one technique would have never been enough to gain our goal  (fig.4). From my experience out in the field, I learned that does not exist any technique, technology or documentation platform able to cover entirelly the documentation of an archaeological site. Integration of technologies is the only proper way to face archaeological sites. Flexibility of methods is the only characteristic that allow archaeologist to develop a creative and dynamic research using technology.
I found this campaign very challenging, the environments were not easy to document, and the constant passage of tourists did not help...
Last year we worked hard to find a good workflow to post process the data and I think that this year, with some help from our students from Digital Archaeology Course we should be ready with a complete model.
At the end of the project, we are also planning to connect high resolute 3D models of every room with the documentation available on the website of the Swedish Pompeii Project, in order to make accessible this work for everybody.
At the end of the campaign we decided to scan our team and leave a virtual footprint of us in the insula ;-)


I came back few weeks ago  from the archaeological excavation of Çatalhöyük, Turkey
where this year I tried  new experiments in the use of 3D technology to document and visualize ongoing archaeological excavations.
Last year I did tests on site using  Image Based Modeling techniques to document the investigation of the building 89, in that occasion the team of the university of California Merced directed by Maurizio Forte, were running similar experiments using instead a phase shift laser scanner, they got interesting results  and the use of both these techniques in the same excavation context gave us a very good feedback on how different technologies that produce similar results (resolute 3D model) obey to different work-flow of data capturing and post processing.

After this tests we gain a good knowledge on how making these tools compatible with ongoing excavations and how to manage the data in a reasonable time frame.
At the end of the first season (2011) It was possible to visualize in the same platform (MeshLab) the temporal sequence of most of the units found during the investigation, moreover  thanks to a total station grid provided by the survey team who operated during  that season, it was even possible to geo-reference all the models realized during the campaign.

The first year was very successful, especially  for what concern the creation of a functional work flow to use during the investigation process, but very few questions about archaeological methods came out. This happened probably because we could not visualized our models in the same  platform where all the other data were stored: the GIS system of the excavation.

After the first season of experiments we figured it out that  Image Based Modeling techniques represent today the best solution to generate 3D models of the ongoing investigation, in fact the accuracy and precision of this methods has been proved to be  more than enough  for any archaeological documentation, moreover using powerful laptops it has been possible to produce in few hours (sometime even in 45 minutes) complete 3D models of the buildings. 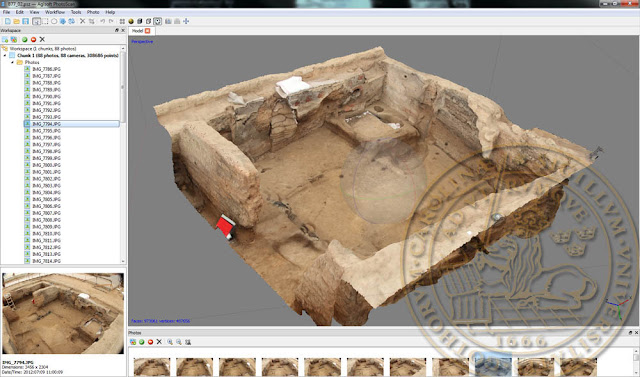 
This year together with UCM we decided to mainly use this method (image modeling techniques) for the documentation of the ongoing excavation,  laser scanner technology instead was mainly employed for the documentation of the entire site with point's clouds.
From the very beginning  we decided to use Image  based modeling techniques on a larger scale, ...I was so much curious to understand if this method was efficent also in a such huge scale, after the first season this was obviously possible, but you know... theorizing something is not exactly the same of doing something... ;-)

The results were really interesting! In fact it has been possible to work on several buildings at the same time and geo-reference all of them in the same space, moreover with the help of Camilla Mazzucato,  researcher at the university of Oxford, we handle to transform the 3D models in features and finally visualize our work  into the GIS system of the excavation (Arcscene) connecting each other data coming from different seasons and different teams.
Together with James Taylor from the university of York, we started discussing how this will effect the field activities and we started brainstorming new workflows in order to integrate this approach into the documentation system in use in Catal.
At the same time an interesting  discussion started also with Scott Haddow from the osteology group that experimented  new ways to use this technique in osteology, here some reference from his blog. 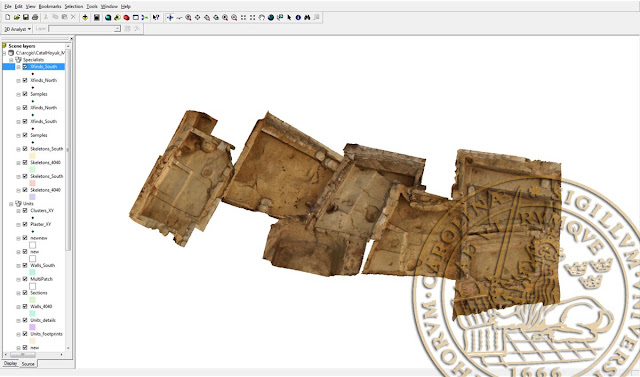 
Before the beginning of the campaign I had the chance to discuss with Åsa Berggren and Björn Nilsson about several possible scenarios,  I think that  these results represent the best  starting point we could get to begin a new exciting research work.

The results of this experiment  open to new questions such as: how the use of this new tool will influence our way to perceive and interpret the data? How our work will effect the investigation of other archaeologists in the future? And... who will answer these question?

In order to have a deep understanding of the problem. I think it is fundamental to bring this work more and more into the field, Çatalhöyük is not just a FANTASTIC archaeological site, but a real experimental environment, where new ideas and discussions comes out constantly