I HAD THE GREAT PLEASURE to participate in ArcheoVirtual 2010, an exhibition and a work shop at "Borsa Mediterranea del Turismo Archeologico", a sort of fair for tourist organizations, museums, technology providers etc.

At the exhibition I demonstrated an Augmented reality prototype made by master thesis workers Tariq Asghar and Abul Ala Nauman. 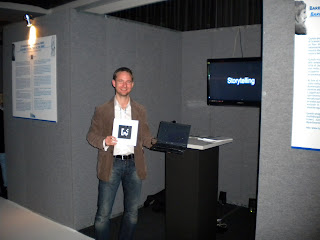 Showing the prototype was indeed an interesting experience. Light conditions were very tough and I never got the spotlight I asked for despite an extensive nagging campaign. Never the less, I managed to demonstrate the prototype for many interested visitors. Many of them, however, did not understand English so well and hence I had to improvise with my poor Italian skills. Luckily Italian people are very understanding and tolerant with Italian speaking foreigners so it turned out to be a very successful language lesson for me. :-)

I also showed a short film clip that communicated the ideas behind the project:

There were many interesting and innovative projects in the exhibition. The following film clip shows a product by the Italian company STARK. The concept is promising but unfortunately the user interface is not so easy to use for first time users (the person in the film clip is a sales person and hence expert user).

The workshop contained a row of interesting and thought provoking presentations of development and use of virtual museums in Europe. One presentation that made an impression on me was made by Victor Menchero from Spain. He described the development of virtual museums from a Spanish perspective in a very vivid manner. Also, the Spanish company Virtualware showed several successful examples of VR based exhibitions, such as a virtual walk in a very inaccessible Unesco protected cave system. The demo film used very suggestive, atmospheric soundtrack which triggered me to ask the speaker if he believed the music to be an important part of the installation. The answer was of course yes, and I thanked him for providing me with an good example to point at for the Lejre case study. My question led to an interesting discussion on the role of music in virtual museums.

According to one point of view, one has to be extremely careful when introducing music in a virtual museum application since one has no control over the interpretations and meanings it brings about. This to me is a very mechanistic view of communication theory that I don't agree with. I don't believe communication to be a perfect transaction of a message from sender to receiver. If you want to control all the meanings and interpretations that the mediated content is able to provoke, should you then also try to control the pre-knowledge, experiences and mental models of the visitor? I'm now even more convinced that the matter of sound and music needs to be carefully investigated within the Timetravel group.

There was also a pre-kick-off meeting for the upcoming EU project V-MUST targeting Virtual museums. The network seems to be a group of very nice and enthusiastic people so I'm very much looking forward to the project to start in late February 2011. 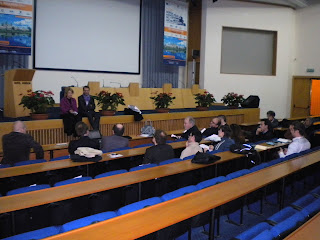 Posted by Mattias Wallergård at 3:24 PM No comments: